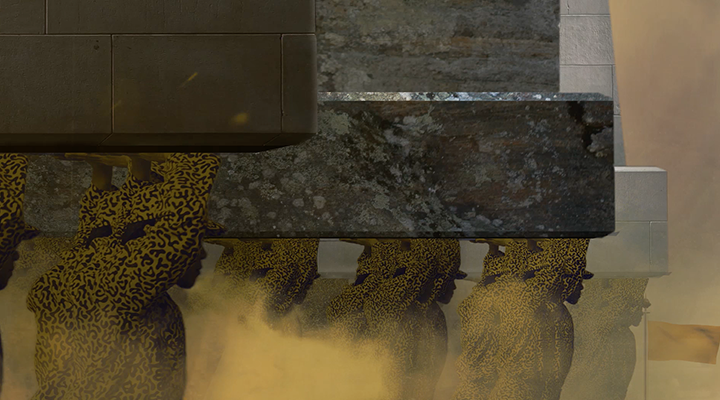 I created a world based on my emotional memory of childhood. A memory that has always stuck with me from my past is the presence of dust. It was dusty, it was always dusty. In towns, bulldozers created dust while skinning out vegetation to build roads and bridges. There was dust while excavators carved through mountains to build highways. Trucks created layers of dust while carrying construction materials. It was the time for dust, the middle of rebuilding a nation’s infrastructure.

In schools, it was a different time; we didn’t have turf or green fields, there was always yellow dirt and sand. All the activities on the field created dust. Even the propaganda film crew built a big, black canopy in the middle of the naked, dusty field to host hundreds of children for the propaganda film viewing. The dust field became a ground zero of horror. Even so, as I moved to higher grades, the dust was everywhere. On the dust field, teachers used corporal punishment, there were school fights and gang fights, and it became a mixture of dust and blood. The image of blood drops giving rise to dust on the dry dirt ground is still ingrained in my mind. The slow progress of dirt soaking in the blood is an image that still fills me with regret toward meaningless anger and violence. It was a time of dust, horror, and blood.